India to Germany – My travel experience

HomeIndia to Germany – My travel experience 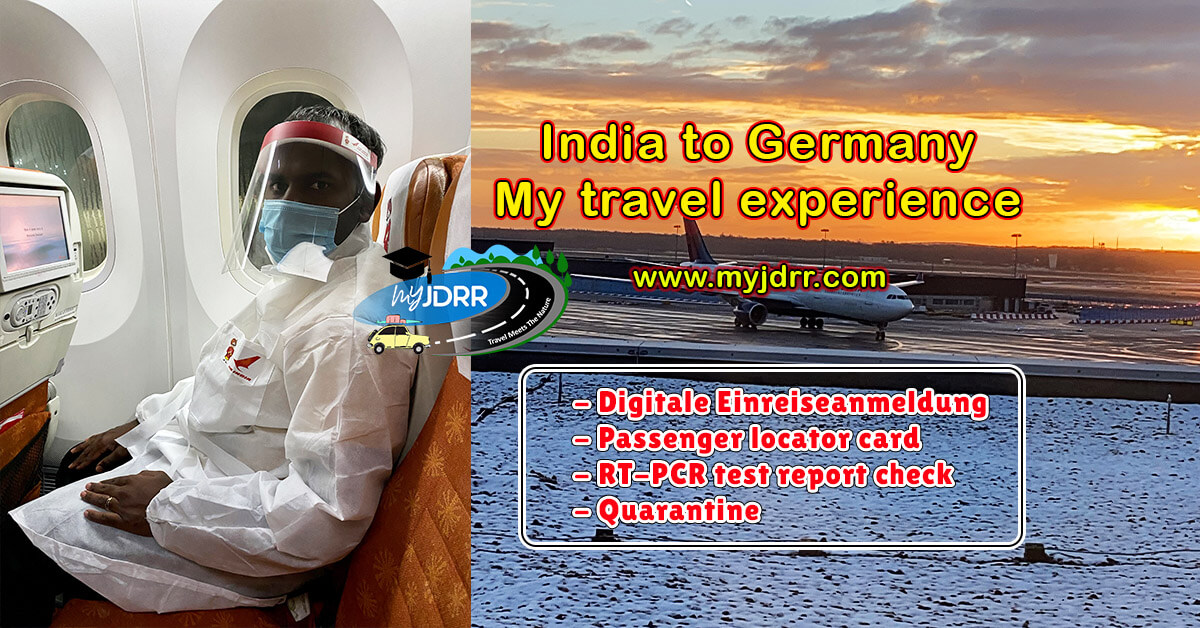 I have booked the two way ticket from Germany to India and India to Germany through the Bobbys Travel on 07.11.2020.

I have taken the corona test for free of cost at the primary health centre in my city. Read my experience from the below link.

In my opinion, it is not really worth to pay and take the corona test. Especially it is not worth to take the test in Germany for which we have to pay a lot than in India. I will explain the reason later on this post.

All the passengers who are entering Germany from the high-risk area should fill the “Digital Registration on Entry” form.

Click the above link and mention the countries where you have been since the last 14 days. It’s also possible to add multiple countries. Once you have selected the country list, proceed to the next step by clicking next.

At the next step, you will receive the necessary information. I got 2 notice.

There was also some other additional information.

There was 7 steps to enter the details.

Since I will be traveling by flight, I have selected “By Plane”.

It is necessary to enter the following details.

A verification code will be sent to a email address or the mobile number. It is possible to choose the email or mobile number for the code validation.

I have choosen email address because I was not using Germany number in India. Once you have received the verification code (6 digit code), enter and select “Confirm code”.

All the necessary deails and then click next to proceed to the next step.

Here we can read all the inputs and click send now. After sending this, it is possible to download the document in pdf format. I have downloaded the confirmation.

The document contains the following information.

Last five details are only from the person who is filling the form. I have received the document in German language.

Reached airport at 15:40 and spent some time with family. Then I went to do my check-in. Before entering into the airport building there was a person who had sanitized all the check-in baggage.

There was a counter before entering the airport building where they asked for the ticket and identification document. I have shown my e-ticket and passport. I have received a passenger health undertaking form. I will explain later why this is important.

After that, there was a check for the e-ticket and passport by the airport officials. Then after the body temperature was measured with the infrared digital thermometer (not thermal scanning).

I have done our check-in at the counter. My baggage was overloaded. I had 98 kgs instead of 92 kgs (4 baggage * 23 kgs). The person at the counter said that it will be an issue. I just convinced them in few seconds and they have accepted to send the baggage without reducing the weight.

Incase if your baggage weighs more, don’t get panic. Try to be cool and covience the person who is at the counter. I would suggest not to argue. In most of the cases they agree for 1 or 2 kgs extra from the total allowed weight. But it is always good to have exact or less weight than the allowed weight. I’m sharing this experience because this could help someone.

Baggage collection was at the destination airport (Frankfurt, Germany).

It is necessary to fill this form with the correct data because we will receive an email. I have received an email with an attachment from Air India with the data which I have given in that form.

Here are the information which we have to fill in the “Passenger health undertaking form”.

Apart from this, there were also app. 8 health-related questions which we have to answer (tick).

Due to very fewer passengers, security check took only approximately 5 minutes. Then after I have reached the gate and waited for the flight.

All the passengers have received a hygiene kit which consists of

Boarding was as-usual like before corona. People who sat at the middle row had received the PPE kit. But it was not mandatory to wear that dress. Many people haven’t worn the dress. In my opinion, we can’t expect social distance inside the airport and also the flight.

I have landed at the Delhi Indira Gandhi International (IGI) airport at 20:50. There was no check-in the aircraft after landing and also the passengers haven’t received any documents to fill.

All have just walked through to the international transfer. There was an indirect thermal scanning happened for all the passengers. I mean indirect because most of the passengers don’t know that there is a thermal scanner located and there was a person monitoring the body temperature. I felt it is good because we don’t have to wait in a long queue. We can just walkthrough.

We had approximately 6 hours 20 minutes waiting time. We spent almost all the time near to the food court. The reason behind that was, we had a pleasant temperature there.

It was very very cold for us near the gates. I would recommend wearing thick clothes if possible full sleeves if you have transit at the Delhi IGI Airport at night. Unfortunately, the pleasant temperature was not maintained inside the airport when we were there.

Food and shopping at Delhi airport

There were only a few restaurants which were opened in the food court (only 2 when we were there). So if you have a kid, be prepared. Almost all the other shops like duty-free shops were opened.

Boarding at the Delhi airport

Departure was delayed by app. 19 minutes. Food (like snacks) was served right after takeoff. In my opinion, the food was not so sufficient. Quantity is less but the quality of the food was very good. I would suggest you to have some food before boarding.

Before landing, morning breakfast was served and the quality and quantity were quite good (my opinion). I have also seen some passengers took foods from the shop and ate during flight travel.

Each and every passenger received 2 copies of passenger locator card and we should fill both the copies. Passenger locator card or Austiegekarte was in the English language as well as the German language. We are advised by the flight attendant to fill this form even though we have already filled the Digital registration on Entry (Digitale Einreiseanmeldung) form. We have submitted one copy to the flight attendant. The second copy is also important. I will let you know the reason below.

As usual, after landing there was passport control. There were too many passengers. But luckily almost all the passport control counters were opened and the process took exactly 10 minutes.

Till now the corona test report was not checked. It was quite shocking for me because it was different in India while travelling from Frankfurt to Thiruvananthapuram via Delhi.

You can read my Germany to India travel experience here

I was hoping that the corona test report will be checked while collecting the baggage.

This is the reason why I have said earlier that it is not worth to take the test in Germany and pay for it.

Corona test at the airport

In case if you would like to take corona test at the airport in Germany. It is also still possible. When I was walking through Centogene at the Frankfurt airport (not inside the terminal), I have noted that it was less crowded. In my opinion test could be done in less than 15 minutes. I don’t know about the other days and time. So beaware of the high demand and prepare for the long waiting time.

Noone of them said specifically that I should be in quarantine. It is really important for me to be on 10 days home quarantine because it was the instruction which I got while registering the “Digitale Einreiseanmeldung” form. I will follow the instruction strictly to avoid any issues. If I get any new information during these days, I will update it on my blog.

I hope that this post gives you some detailed overview of my travel experience and helps you to clarify some of your doubts.